So to follow up Terror Tuesday, I thought I should start a new Wednesday tradition. I will be posting old school music, movies, and whatever else my little heart desires. You will like it or not, but it will take ya back to a different place in time. This is my goal, should Way Back Wednesday be successful.

To kick the new tradition off with a bang, I'm going with a few surprising favorites of mine. Most people know I love Metal, but now you'll learn I have an affection for all things nasty!

While this song was released when I was a bit older. I was still just as innocent and clueless about the subject matter of the song. As you listen, tell me this doesn't take you back to, something! Always a fan of things to shock the masses, this girl, so if you have any Way Back Wednesday suggestions that will no doubt escape my line of thought, please post them in the comments below.

So go grab your cassettes from wherever you've hidden them to look as though you're not living in the past, and remember the good old (nasty) days!
at 7:05 PM 3 comments:

Technically, it's Wednesday morning but I lost track of time playing video games. Damn Xbox, it's all Mister Bones' fault. So now that I'm no longer stuck playing Halo or Justice League Heros, I'm going to attempt to write a meaningful and insightful blog.

One of my most treasured of Clive Barker's short stories turned into a full length feature. I rather enjoy this movie for all that it is. The blood, guts and gore is enough for a fan of such and it's got Barker's chilling stamp of horror all over it.

The story is about an aspiring photographer Leon (Bradley Cooper) who is just searching for the perfect shot. He gets a couple of lucky photos of a woman on the subway and things start looking up for him and his waitress girlfriend, Maya (Leslie Bibb).  He reads that the woman from his amazing photos is missing and is curious to find out what happened to her. After studying his photographs, he notices a man, a butcher (Vinnie Jones) riding the train. He obsesses about finding the butcher and essentially the murderer. Eventually unable to concentrate on anything but this man.  Leon's sanity seems to fade as nothing else can occupy his mind but finding the butcher, even if it kills him.

The graphic violence is just what you would expect from a movie based on Barker's Books of Blood. The literary title gives you as much. For me personally, I loved the decapitation scene. More movies should include bloody, disgusting, gory, violent decapitations. The psychologically thrilling aspect to this movie adds much to my love of all that is over the top gore. Sure, many critics failed to see my view on why this is a good movie. I am aware it's not for the general audience, but for those of you who want a decent horror/slasher film, this would fit the bill. Better yet, read the Books of Blood and then watch it. I'm always that person who reads the book before I watch the movie. I find there is so much to derive from paper than on screen every time.  Ultimately, it's a good one to own. I watch it once a month or so. Grab it for your collection and revel in the bloodbath!


On a personal note, I have officially not smoked all day. I don't really want one thanks to the nice sticker on my upper arm. I just hope when I don't use these I will not resort back to smoking. Nicotine patches definitely make it easier, for sure. So Day 1 is over. Day 2 is looking great! 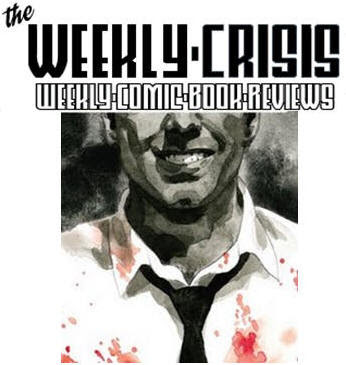 I'm returning to add an extra link to The Weekly Crisis. They've just posted that Boom is going to release a new Hellraiser comic by Clive Barker. I can't wait. Figured it was awesome timing to watch Midnight Meat Train for Terror Tuesday! Enjoy, The Weekly Crisis is awesome!
at 1:41 AM No comments:

I've been hearing things about a possible Lobo live action movie that was going to be directed by Guy Ritchie. So he's not doing it..he is doing it. Whatever! I'm not really on board with this idea. Now, a movie about this character would definitely kick ass, however, I don't think he is the director to take this one from page to screen. This has been in the media for a couple of years now and still nothing, which is probably for the best! Guy Ritchie decided not to do the Lobo film and instead did Sherlock Holmes (didn't see it) I usually like Ritchie's films but lack the time to see something that I'm not "dying to see". Unfortunately he hasn't made anything of that caliber for me in a while.

So the script for Lobo has been written by Alan Grant (Lobo writer) and Skip Woods (Hitman) and should be ready to take to the next step. With Jeffrey Dean Morgan to play Lobo, now just awaiting a director that won't fuck it up! Speaking of Jeffrey Dean Morgan, I love this guy. He did wonderfully in The Losers and was redeeming in The Watchmen. I may be biased about The Watchmen movie, because it was one of the first comics I fell in love with, but the movie's talent was more than lacking in my opinion. I could have done a better job (and I'm definitely not an actor, but I do read!!) Alan Moore amazed me with that book! And I love him for it. The movie just didn't encompass what I felt it should have, and I fear the same may happen with Lobo or any other comic to film adaptation made from here on out. Comic fans aren't the "masses" and the movies created from comic storylines are geared for the "masses" to make money. I understand that. It's business...but I don't have to like it. The Losers was a great movie, on the other hand. But it isn't as difficult a transition from page to screen as some of the other comics rumored to be movies in the making lately. So even with Jeffrey Dean Morgan as the potential Lobo, I fear this will be pure douchebaggery and I will hate it. Prove me wrong and I'll give ya a cookie...or something!?! Did I mention my love for Alan Moore, he is amazing. I'm going to stop dreaming of literary Gods and watch the remake of The Wolfman with my boys. Hopefully it's as awesome as the original was years ago. So until next time...Keep it real, yo!
at 1:04 PM 2 comments:

So this is Christmas.

Almost finished with my shopping :-D yay me. Looking forward to my nephew and Sister to be here. God knows we can blow some $$ together. Keeping this post short since it's from my phone, I will have a brilliant one soon. Just be on the lookout for three chicks, who look oddly similar but very different, on a shopping rampage. My nephew is an awesome Shaggy btw. This pic might have been the most awesome gift this season. Its great that my influences passed things to me which I keep passing onto my sisters, and hopefully they will pass to someone as well.

So I love surprises (the good kind) but I also love the presents I already know about. I can't wait for Christmas to get here!!
Published with Blogger-droid v1.6.5
at 9:17 AM No comments: