I don't know how much more I'm going to be asked to endure. From working seven days straight, to moving and having disaster after disaster...I can't deal with another catastrophe! I have to be up bright and early to work again tomorrow after working today and unpacking after work. I've managed to hang up my curtains in the living room. My roommate brought in his sofa and huge "man" tv. I've unpacked clothes and linens. Installed the washer and dryer just to wash my work clothes. And for some reason people are asking what my problem is...

I haven't been so stressed in a very long time. It's progressively gotten worse over the last few weeks. I don't like blogging about personal trials, but I'm breaking down at this point. That is what this was meant for initially. Just for me to vent. It is what it is. I'm going with that phrase in everything from now on. I'm tired of trying to figure out things that aren't meant for me to understand. I'm stepping back and going to let whatever happens...happen. I give up.

At least my living room is pimp though! Here are some pics of what we've accomplished so far.

I don't know how much nerdier two kids could be. *Note the two laptops, Xbox with two joystick controllers (not mine btw) I think I'm going to be okay eventually, if I just take a minute to breathe once in a while. I just can't seem to find a moment to gasp for air.
at 12:05 AM 2 comments:

Kevin Smith to the Rescue

After another horrible day, Kevin Smith doesn't fail. I can always fall on any one of his movies to make me forget. This time it's Clerks. (Probably my second favorite of his)

Here is one of my fav scenes....enjoy

Deftones- Be Quiet and Drive (Far Away) 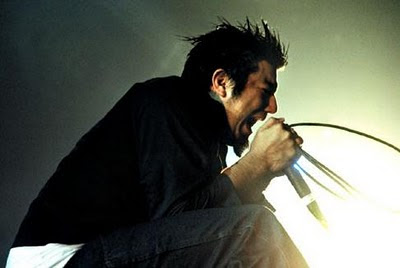 One more for WBW. It's becoming more and more apparent that some of these songs cause me to become introspective and somewhat depressed. Part of me wants to go back to my regular posts, most of me wants to embrace these emotions and just let them out. Either way, Deftones is and will always be my favorite band, no matter the state of mind it creates for me.

I've been saying I'd catch this movie "sometime" for a long time now. I finally sat down and watched it tonight for this week's Terror Tuesday post and loved it.


The ethical situations are some I've debated for years now. I was disturbed with some of the subject matter; however, it's such an emotional human story that makes you choose a side. I don't want to go into detail here, but I will say watch for yourself. After seeing it tonight,  I will be purchasing it for my very own soon.

Del Toro has yet another winner for me. He is absolutely brilliant!